Find out more about here

At the Bloodstock Festival 2016, a number of bands spoke eloquently from the stage, about why Bloodstock is the UK’s only true outdoor metal festival. Never was a truer thing said. It’s not just the stellar line up, that gives room to so many different metal genres, including the edgy boundaries of extreme metal. It’s also the sense of a community coming together to celebrate all that metal means to them. The sunny weather that never seems to fail Bloodstock, also helps of course. More than anything else though, it’s that Bloodstock’s metal heart is in the right place. Naming the main stage after Ronnie James Dio, and keeping it that way; is complemented by the second stage being named after Sophie Lancaster, the brave young woman who died defending her boyfriend from a brutal attack. Visted on them just because they were proud of being part of an alternative community.

And so to Friday, which saw the final ever UK apperance by Twisted Sister. More about that celebratory and poignant goodbye later.

Hark (10/13) from Wales started off proceedings on the Dio stage, with a heady mixture of power riffs, melody and cool dynamics. “Wakey Wakey Bloodstock” was the cry from guitarist and vocalist Jimbob Isaac. A perfect start to the Festival, guaranteed to blow any non-metal cobwebs away.

Boss Keloid (11/13) on the Sophie stage provided some epic stoner/sludge metal. They also have a compelling swing to their music, which just pulls you in, as they build the intensity of each song. Vocalist Alex Hurst also has the most fabulous blood-curdling scream this reviewer has ever heard! Axis of Green gives full vein to his impressive vocals, accompanied by an absolute monster of a doom riff.

What can one say about Evil Scarecrow (11/13)? It’s the most fun you could ever hope to have with heavy metal! Pretty much the Bloodstock house band, they came onto the Dio stage at 12.50 mid-day, to an obviously capacity crowd. Songs abound about robots and crustaceans, and the audience unquestioningly gets involved in lots of …uhm …dancing! They are great muscians too. Catch them if you can on their upcoming UK tour.

Meta-stasis (13/13) were an early highlight of the Festival. Think of Slipknot at the peak of their powers, and add in a musical vision and passion, that fearlessly blends in a range of other musical influences. Including an infectious dance like vibe. The pit opened up on the second number, and it all went pretty mad from there, as the crowd in the Sophie tent fell in love with this great band. Peter Benjamin from the brilliant Voices joins the band onstage, adding some great screams to the band's sound. There can be little doubt that when Meta-stasis return to Bloodstock, it will be to the main stage. 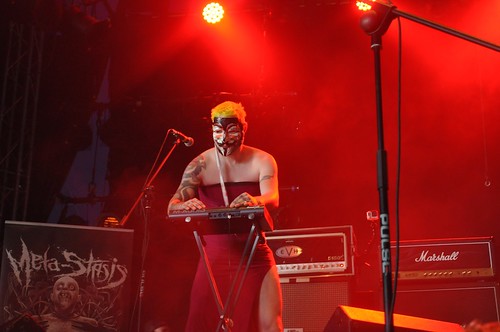 North Carolina’s Corrosion Of Conformity (11/13) on the Dio stage, finish their set with an extended work out on the classic Clean my Wounds. The combination of Pepper Keenan’s spacey psychedelic soloing on guitar and Mike Dean’s funky bass riff, mixed in with some reggae dub effects, is simply stunning!

The Bloodstock audience have been waiting a long time for Venom (12/13) to finally grace a Bloodstock stage, and they don't disappoint. With frontperson Cronos on top form, they demonstrate why they so clearly influenced the development of extreme metal. The early portents of thrash, death and black metal, can all be heard during a full on live performence. Highlight of course is the classic Countess Bathory; and there to be seen at the side of the stage grooving along, are members of Corrosion Of Conformity. This is a band that fellow metal muscians clearly hold in high esteem, for their contrbution to the development of metal. 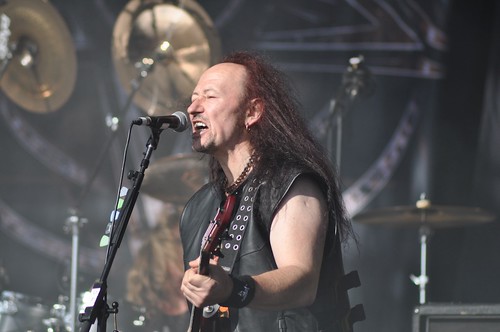 Behemoth (11/13) play The Satanist album in full. The set commences eerily with Nergal coming on to the stage carrying fire, which forms part of an opening ritual, to a background of disembodied screams. The band then kick in with Blow Your Trumpets Gabriel, with its powerful black metal atmospherics. It is an impressive set, although somehow Behemoth playing in the sunny daylight doesn’t seem to entirely fit. They finish off with Chant For Eschaton, with blood coming from the mouths of the band, and the front of the stage raked by flames. It’s a great song to finish with, propelled by some driving death metal rhythms. 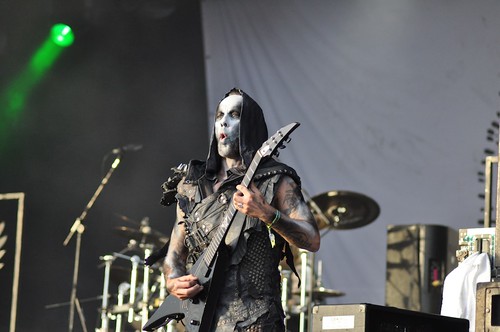 Dee Snider vocalist and front person with Twisted Sister (13/13), states unequivocally from the stage, that the only true Metal Festival in the UK is Bloodstock. He describes how the Festival understands the history of metal, and Twisted Sister’s relationship with the UK…“You saved our asses in the 80s!”. Playing material from as far back as the first album Under the Blade, the bands final goodbye was a joyous celebration of heavy metal and the bands legacy. Destroyer from the first album has a very raw heavy sound live, keeping the faith with the very brutal and rough sound of that album. 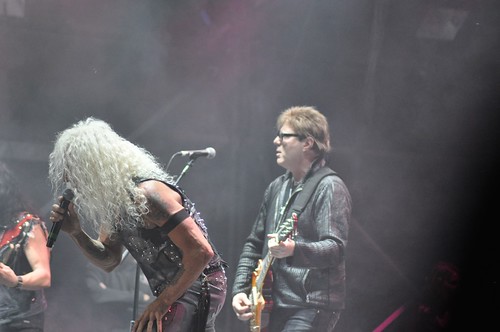 At one point Dee Snider exclaims “This is not a sad goodbye, it's like an Irish funeral, full of songs and drinking”. There are though many poignant moments, epecially when each of the band members, says their individual goodbye to the audience. Sadly departed original drummer A.J. Pero who died in 2015, is mentioned many times. Covering A.J’s drum duties on this farewell tour, is ex - Dream Theater drummer, the extraordinary Mike Portnoy, personally recommended by A.J to the band, in the eventuality that he couldn’t play anymore.

We’re Not Gonna Take It, perhaps the bands best known song, is played with passion, energy, and joy, with the audience singing back the chourus to the band. As Dee Snider puts it…”No one can stop us having a good time. No one can stop metal!”

A great band, and a great first day at Bloodstock!