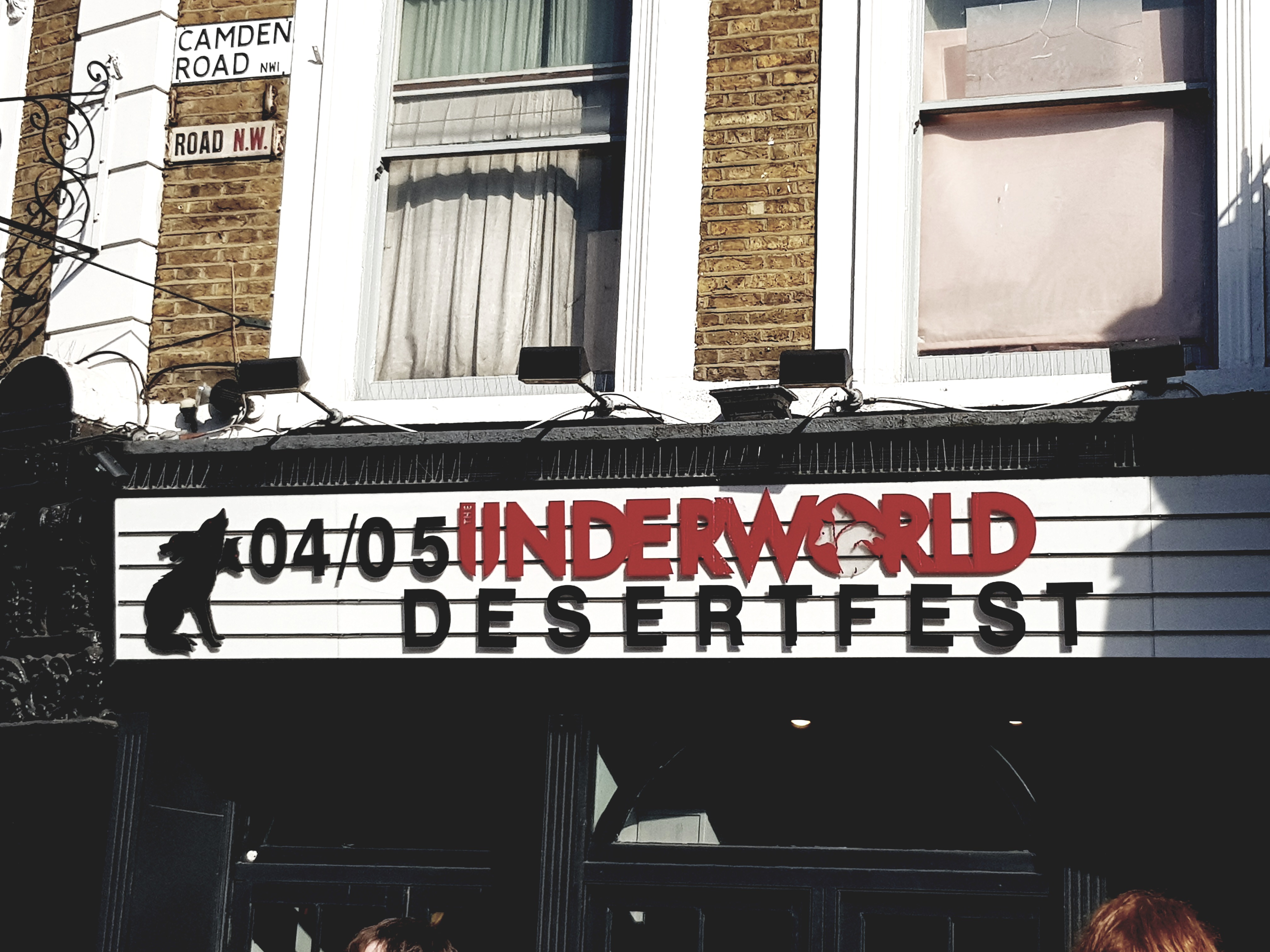 Despite the sun absolutely blazing for most of the weekend, there was absolutely nothing stopping the lovers of the riff heading in to some of the darkest corners of Camden Town to celebrate yet another Desertfest. With Desertfest being in its seventh year it has truly been excellent to see how much it has been able to grow year on year, and with the expansion to include BOTH KOKO and The Roundhouse across the weekend it is clear more than ever that this is an event that is long going to invade Camden.

We kicked off the Friday by heading down to The Electric Ballroom for a somewhat lacklustre showing from the English Black Metal unit Winterfylleth (6/13). Hampered by some pretty horrendous sound issues, their largely unimaginative set failed to grasp the attention of large sections of the crowd who ended up either wandering around the bar area or heading off to another venue. Walking over to The Underworld, there's a good chance everyone had simply decided to head there as the crowd for The Black Wizards (8/13) was vast considering the early set-time. Hailing from Portugal this self-proclaimed 'Fuzzadelic' four-piece did pack a serious level of groove. A good set, and a band you almost certainly need to keep tabs on in the next few years.

Sticking around in The Underworld, Black Moth (11/13) were up next and absolutely raised the bar right from the off. The last time we seen this band live it was at their album launch show in Tufnell Park and it was clear that night that some of their newer tracks were going to insert themselves in to the set-list with ridiculous ease. Tonight you could see that Black Moth's confidence on this tour had really been established with some of their newer numbers garnering as strong a reaction as the likes of Tumbleweave, much to the clear delight of the band. There is a genuinely heightened sense of power when Black Moth hit the live stage in comparison to them on record - something they clearly relish.

Next up for us was a quick jaunt over to The Devonshire Arms, a venue which struggled quite a bit to deal with the kind of scale involved with Desertfest. Whilst most in the pub spent most of their time behind a pillar of some description, whether that was the structural kind or the living and breathing kind, Lionize (7/13) did their best to inject a strong level of groove into proceedings. It's actually a bit of a shame that in the space of a couple of years this band have gone from taking up a slot at The Underworld to playing low down in the pub but it clearly hadn't affected their energy on the awkwardly placed stage.

Heading back over to The Electric Ballroom, the legendary Eyehategod (10/13) were truly greeted with a hero's welcome and immediately launched themselves in to their very best rendition of 'we're going to show you all how it's done' in musical form. Eyehategod have often been unfairly overlooked in comparison to their NOLA buddies over the years but there's absolutely no doubting that they are one of the most important Sludge units of all time - in which case they had the Desertfest punters absolutely eating out of the palm of their hands. With Mike Williams snarling around the stage with a menacing level of mischief and Jimmy Bower putting on a riff clinic, Eyehategod clearly showed off why they were one of the most anticipated acts all weekend.

What followed for us that night sadly fell well under par in as far as what came before and after. Graveyard (6/13) headlined the KOKO's turn as the main stage on the weekend in a set that was lacking both energy and any level of imagination. They felt very middle of the road and suffered in the slot despite it being a headline one.

It came as a bit of a shock to the crowd on Saturday night as the brilliant Napalm Death (10/13) burst onto the stage at the Electric Ballroom playing their blisteringly hectic brand of grindcore. Without having the need to research this, they must have undoubtedly been the only band of the weekend to have played 24 songs in one set, including pummelling punk anthems such as How the Years Condemn, Instinct of Survival and the two second punk epic You Suffer. Barney Greenway really tried to rile up the crowd from the off, as he barked at the crowd MULTINATIONAL CORPORATIONS GENOCIDE OF THE STARVING NATIONS, but although they played to a relatively full venue, the stoner crowd probably weren't as engaged as Napalm Death's usual supporters. The band raced through a frantically quick and heavily politicised set like no other band of the weekend. Highly entertaining and energetic, and although the crowd were a bit sombre, they didn't seem to care. Like nothing else at Desertfest, Napalm Death were on great form.